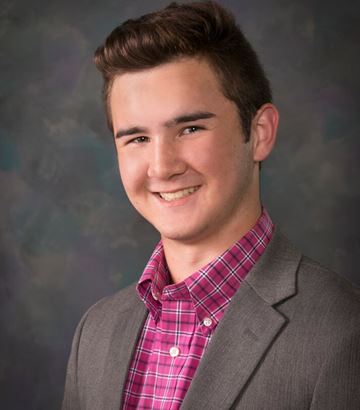 Nicholas Adamson is currently a senior at one of the finest schools in the area, John Glenn. He is strong willed, diligent and a confident leader who wants to broaden his horizons. Nicholas works for Aqua Systems, a commercial/industrial and residential water treatment company, as an apprentice Application Engineer & Salesperson. This has given him the opportunity to meet a variety of new people, enabling him to develop strong social skills. Nicholas also stands in at BNI (Business Networking International) events on a regular basis. BNI gives him the opportunity to communicate with a multitude of business owners and representatives in a wide variety of business fields. At his High School he has finished his 4th year of Chinese. He wishes to further his education at IUPUI in the pursuit of a doctorate in Dentistry.

Nicholas has made it his personal goal to push his boundaries and create as many avenues to success as he possibly can. When Nicholas was approached with the opportunity to participate in the CEO Program, he was both honored and excited to represent his High School. The concepts and ideas behind this program have sparked an interest and drive which he looks forward to instilling in his future endeavors.

Nicholas has always admired his grandfather, who after moving himself and his family from Scotland to the United States, started an engineering and tooling company. As he and his family were acclimating to a new culture and brand new surroundings, he was able to obtain 6 US Patents in engineering. The business continues to thrive to this day.